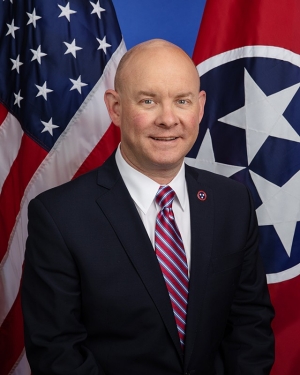 The Tennessee General Assembly has elected Jason Mumpower to be Tennessee’s new Comptroller of the Treasury. The 47-year-old is a life-long resident of Bristol and previously represented Sullivan and Johnson counties in the General Assembly.

Mumpower was elected earlier today during a Joint Convention of the Tennessee State Senate and House of Representatives meeting in Nashville’s War Memorial Auditorium. His election follows Comptroller Justin P. Wilson’s decision to not seek another term.

Mumpower has most recently served as Tennessee’s Deputy Comptroller, and he will now lead the Office and its more than 560 employees.

Comptroller Mumpower is graduate of Bristol Tennessee High School and King University (née King College), where he currently serves on the Board of Trustees. His wife, Alicia, and 8-year-old son, Max, were pleased to attend today’s election.

“I am honored by the General Assembly’s vote allowing me to continue serving Tennessee in this important role,” said Comptroller Mumpower. “I’m proud to help all Tennesseans by holding our government entities to high standards of financial and operational accountability.”

The Comptroller’s Office is primarily responsible for the audit of state and local government entities and plays a key role in the general financial management and oversight of Tennessee state government.

“Our Office will remain committed to producing independent audits and objective research,” said Comptroller Mumpower. “We will continue to encourage conservative fiscal management of taxpayer dollars and stay focused on our mission to make government work better.”

If you suspect fraud, waste, or abuse of public money in Tennessee, call the Comptroller’s toll-free hotline at 800.232.5454, or file a report online at: tncot.cc/fraud. Follow us on twitter: @TNCOT