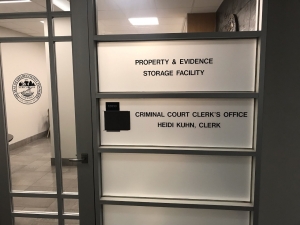 An investigation by the Tennessee Comptroller’s Office, working in conjunction with the Tennessee Bureau of Investigation, has resulted in the indictment of former Shelby County Criminal Court Clerk staffer Steven Sharp.

The Criminal Court Clerk’s Office maintains all property and exhibits held in evidence for cases before the criminal court and preserves evidence for any future appellate proceedings. In June 2021, investigators received a complete list noting that 2,045 evidence cases contained money stored in the evidence rooms.

After reviewing all the evidence cases, investigators determined that former Principal Court Clerk Steven Sharp stole cash from 270 of the 2,045 cases. In February 2022, Sharp admitted to investigators that, beginning in 2018, he took money from evidence boxes in both evidence room locations.

This investigation originated when the family member of a victim came to the evidence room to retrieve the family member’s belongings. An office employee noticed that money was missing from the evidence box. A second incident of missing money also occurred which prompted an audit of the property and evidence rooms on October 19, 2020. Sharp did not show for work the day of the audit, and his employment was officially terminated on October 22, 2020.

Based upon this investigation, in August 2022, Steven Sharp was indicted by the Shelby County Grand Jury on one count of theft over $2,500 and one count of official misconduct.

“Offices that maintain evidence must conduct periodic inventories to ensure that all property is safeguarded,” said Comptroller Mumpower. “It’s also necessary to establish strong internal controls that help eliminate occasions when one person is left unattended with important and valuable assets.”